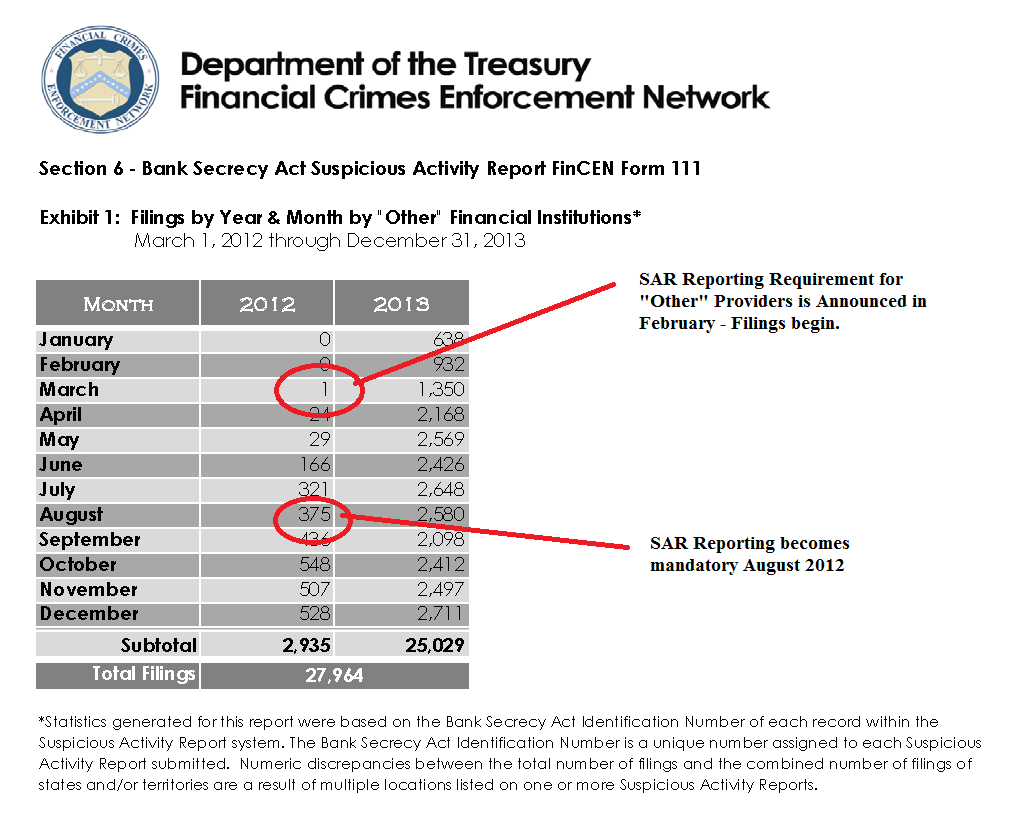 It seems that FinCEN, after requiring so much input from the mortgage industry, but yet not releasing data, felt compelled to release a report.  That analysis is available here:

Mortgage News Digest began requesting information from FinCEN's press office for statistics at the end of May.  Calls went unreturned, but this data satisfies the request.


From Mortgage News Digest June 2014 "Threats were made, and the industry scrambled to make sense of the procedures required and implement them.  Systems were automated to allow easier online reporting. Yet FinCEN still hasn't released any new data since Q2 of 2012 - almost 2 years later. How does this help us in the field?  Several calls to FinCEN went unreturned, so while there may be information in the works, we haven't seen it yet. (June 2014)

At last we have the data, but it shows anemic reporting data.  No wonder this became a low priority.

Although the FinCEN guidelines suggest a strategy of annual audits and loan level audits, such as those conducted for quality control by most lenders, from the perspective of the initiative that spawned this requirement, the audits come too late to have any real benefit.  We have found that most mortgage brokers don't understand their role in this process.  "We haven't had any SARs!" comes the report at the audit.

These words are spoken with pride, but the revelation of NO findings may actually be a trigger for a regulator to look MORE closely, and then discover that the only loans included in the sampling are those which have already passed underwriting muster.  In today's environment brokers and small lenders alike should take the approach that the government has assigned them the role of "watchdog."  Embrace it.  File a SAR today! It's your PATRIOTic duty!


As lenders and brokers we also experience the mixed message: "Keep your customer's information private at all costs."  This trust is the foundation of our business.  "If I report this information about my customer to the Federal authorities, am I not breaching that trust? Won't it come back to me through my referral sources?" These concerns have a reasonable basis, but understand this:


The BSA/SAR reporting requirement is based on information derived from the mandatory requirements of the PATRIOT Act (Providing Appropriate Tools Required to Intercept and Obstruct Terrorism). Your prospect may not seem to be a terrorist, but terrorist funding is commonly sourced through illegal activity like real estate investment, cash businesses, medical companies and many self-employed businessmen.  After 9-11, your company mantra - regardless of whether you are a one-man shop or a large lender - should include "If you see something, say something."

Oh, By the Way, Your Annual AML Audit Deadline is Just Around the Corner


If you initiated your AML plan in August, 2012 with everyone else who became subject to the FinCEN rule at that time, you were required to review your AML procedures annually.  Your audit would be due in August. Let us help you with that.  Call or e-mail today.

You can also receive a free, simple self-audit checklist by requesting it here:

Document your policies and procedures to reduce risk and increase profit.