Behind the headline splash - real violations


We have gotten used to the CFPB picking on things in the range of "technical violations" and announcing large penalties. This induces paranoia and an acceptance of the idea that, despite our best efforts, fines and penalties in the course of operations have become a "cost of doing business." In the Prospect Mortgage case, however, these incidents would be clear violations for even the uninitiated.

We recommend a review and audit of referral relationships and lead generation arrangements, but this finding doesn't mean abandoning balanced and compliant lead generation techniques. As a simple measure, if you find any "quid pro quo" activity, you probably have a violation. 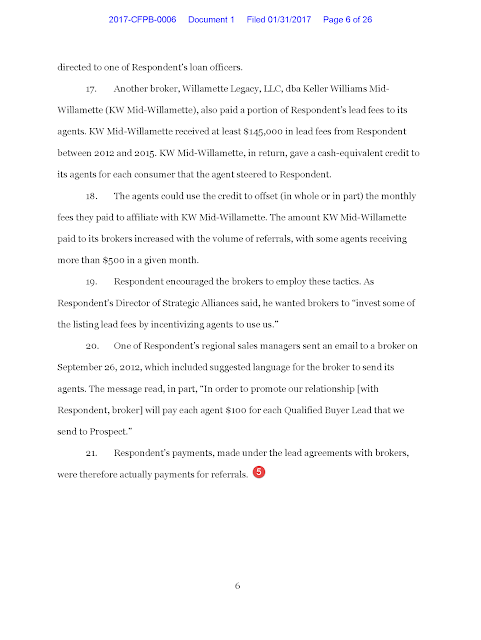 5. Ultimately, it was easy for the CFPB to draw a straight line from the referral to the payment, particularly with the concentration of this activity.

Beyond this, though, some of the activities that called the arrangement into question would not be violations if they did not have the issue of payments associated with them. For instance, requiring the approval of a particular lender or lenders (such as those appearing on an approved list) does not constitute a kickback scenario. If the companies had not received per loan payments, then the idea of a reputable local lender re-qualifying prospects makes sense and is in both buyers' and sellers' interests.

Planet Mortgage Loan Servicing referrals to Prospect look like a legitimate fulfillment referral arrangement. However, because the payments were not based on standard services provided, but rather on a split of the fees that Prospect received, the ownership and activity tests should have been applied to make sure that these were not sham arrangements, simply for the purposes of generating a referral fee. There is nothing wrong with paying for services provided or fulfillment, nor is there a problem with joint ownership and risked capital splitting fees.

Perhaps the most troubling finding surrounds the penalties for joint marketing. So long as the parties share the actual cost (that the originator isn't paying for the ads on behalf of the agent), there is no prohibition on co-marketing. In this case, the decision of the CFPB seems to hinge on several e-mails which alluded to steering the customer as a consequence of the arrangement.

MSA's are NOT Illegal - You Have to Look at the Circumstances

Here is the CFPB's cautionary memorandum on this topic. MSA's , they say, can be disguised as payments for referrals. Each situation has to be examined. If you look at our suggested policy on this matter, as reported in our January 2014 issue, you will see that management must review these arrangements to ensure that fees paid are commensurate with the value received - whether it is joint marketing, desk rental, or even affiliated business arrangements.

"Quid Pro Quo" Arrangements at Heart of All Findings

Many of these actions, in a vacuum, are not violations. In any review, focus not only on the written agreement, but exercise extra diligence beyond the paper documentation to see if the action causes any pressure or steering on the part of the consumer or other parties.

The payment of referral fees corrupts the customer's ability to evaluate whether they are receiving a fair offer by encouraging the use of providers whose costs are inflated by the need to pay referrals. Ultimately, the best prevention of these kinds of violations rests in a sales culture of referrals sourced through value-added relationships where lenders who provide the best service and pricing lead financing decisions. Value is also added by lenders who provide community services, such as home financing seminars, financial counseling and education, and who work in partnership with real estate sales professionals to promote transparency in their relationships. Refer three lenders or title companies, not just one. Let the borrower choose.
Posted by Thomas Morgan 202-550-LOAN at 1:52 PM

Document your policies and procedures to reduce risk and increase profit.